When I got the confirmation that I was going to Vegas I was very excited. By the way, Vegas = fun, right? Although it was a business trip, we only had a meeting on Monday and we would arrive on Thursday. Yuru! We asked for Friday off to enjoy the city for 3 days (Friday, Saturday and Sunday).

When I applied for my American visa it was approved for 10 years. More than the validity of my Brazilian passport. And what happened was obvious: My passport has expired and the visa is still valid. What to do? Take the two passports! Yes, the visa is still valid and what is not valid is your passport. Take the two, show the visa and at the time of identification show the current passport! I’ve done this a few times and never had a problem!

Visa-checked. Boarding pass- checked. Climate … January is Winter in the Northern Hemisphere and then the next concern was: Do I have enough cold clothing? Although the climate is desert the average temperature in winter is 10º. From there, making the suitcase was easy: legging, boots, long-sleeved knitwear, coat, scarf, burrow, and gloves.

What many know today as a place of fun, casinos and glamor was once a desert and is still roasted by desert. Some apocalyptic and zombie movies show that Las Vegas would once again be a desert if something catastrophic happened to the human race. Let’s hope human never ends!

Vegas is the most populous city in the state of Nevada and approximately 5 hours (if you are thinking of doing a road trip 😃). The first record about Las Vegas was made in 1829 – a time that the area still belonged to Mexico – In fact, much of the territory now known as the United States was attributed to Mexico that was conquered by the Americans in the Mexico / US War. The Territory of Nevada was included to Americans in 1855.

We can attribute much of the Las Vegas name to Mexican Raphael Rivera. Raphael traveled along with the merchant Antonio Armijo. In search of water, Raphael ventured into unexplored lands and eventually discovered an Oasis – a small fertile region in the midst of the desert, thanks to the presence of water – which became known as Las Vegas Springs. Raphael has a park and a street that take its name in Las Vegas.

The time passed and the place happened to be a railway city but due to diverse external factors of the time came the time of the decadence. The game was then released in 1931 with the goal of helping the economy and in fact brought several new businesses to the city. Many of the casinos were dominated by gangs and gangsters. In 1960, with the purchase of several locations by billionaire Howard Hughes, the federal government puts an end to the local mafia.

The rest is history, marriages made by Darth Vader and many people wanting to break the bank and breaking their own pocket.

What happens in Vegas …

The place is worth the fame that has … coming off the plane, we were surprised with the nickel-hunting machines inside the airport.

We played to see how it worked, but we did not win anything at all ☹. After the game, we took a Uber and went to our Hotel – Wyndham Grand Desert, located at 265 E Harmon Ave http://wyndham-grand-desert.hotel-rn.com/?lbl=ggl-ex. The hotel has rooms  apartment, with bedrooms, suites, living room, bathrooms and fully equipped kitchen (with refrigerator, stove, coffee maker, microwave, etc)… The famous Las Vegas hotels are on the Strip Las Vegas Blvd, everything happens on this street: Most famous Casinos hotels, night clubs, shows, etc. Our hotel was not on the strip (short way people call the street), but it had free shuttle service to the strip all day and night.

We arrived shortly after noon, did check-in, took a bath, went out to eat something, and went out to discover the place.

Seriously, this is one of the best hamburgers I’ve ever had! In this hamburger, you pay a fixed price for the type of hamburger (burger, cheeseburger, bacon burger) that you want, and the complements (toppings) are free, there is a list of them. 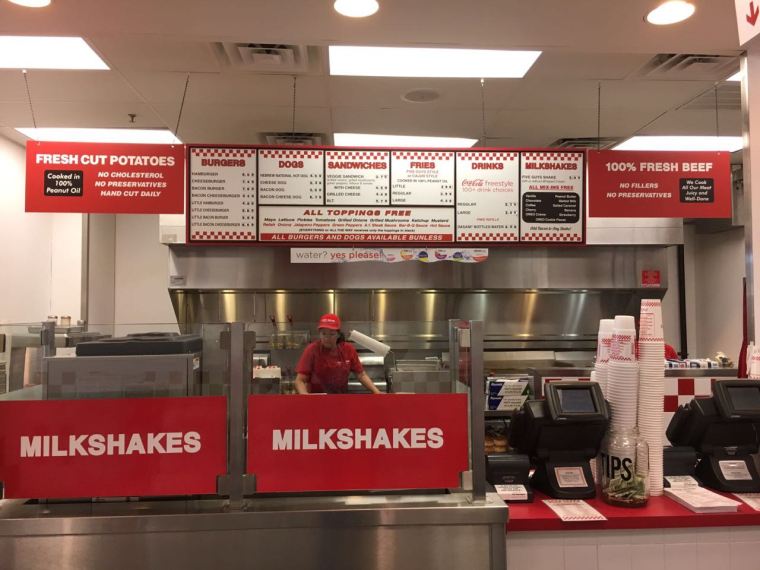 Besides being a delight, it’s cheap when compared to other burgers and you can get as much of a peanut as you want. You even have the app to make your order and just go and get it. After eating very well at Five Guys we walked to the highly anticipated Cirque du Soleil show at the Hotel The Mirage.

The show we watched was LOVE and we ❤  it! Arriving in the space where the presentations take place I was surprised by a super decoration !!

Every show has the soundtrack to Beatles songs. The show is beautiful !!!!!! The selection of songs surprises us. You can’t take pictures even in mobile phones without a flash during the show. As I did not know, I took! I took a photo outside (that is allowed)

and some of the show (this is not allowed), but they caught my attention.

On the stage,  several scenes happen at the same time, be careful not to miss anything. The songs and scenes are great, I was very emotional.

One tip: we were surprised because we bought the tickets for an unreliable website and arriving there, our seats were not the ones we had chosen. The best website to buy tickets is the official website of Cirque du Soleil – https://www.cirquedusoleil.com/. There are several websites that sell the tickets, even for a promotional price, but better not take the risk and go through what we went through.

Casino The Mirage Volcano – Keep an eye on the time

When the show ended we went to look for the famous Casino The Mirage Volcano. Unfortunately, we were unable to see it erupt due to the time, it erupts from 8 pm to 10 pm. Impossible, since the show ended around 10 pm.